What is Reverse Graffiti and How Can it Help Your Brand 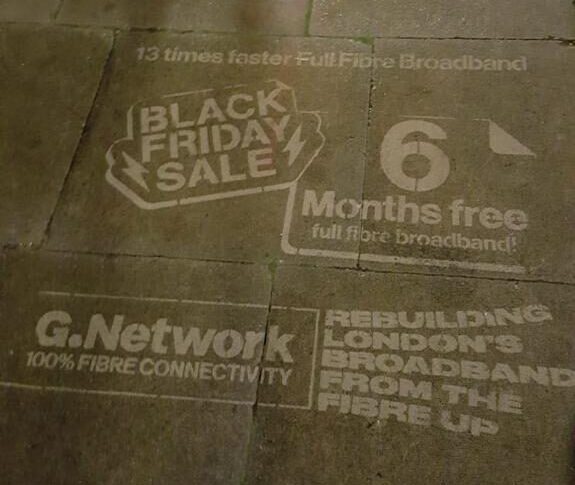 Not sure if reverse graffiti is right for your brand? This form of guerrilla marketing can be highly effective and super budget-friendly for brands of all sizes. In fact, businesses that invest in guerrilla marketing spend 90% less on advertising due to the unconventional methods.

Regardless of what kind of brand you manage, reverse graffiti is a great way to promote your brand while being environmentally friendly. Plus, it’s a pretty unique way to stand out from your competition in today’s fierce market.

Not sure exactly what this type of street advertising is or how you might be able to use it to promote your brand in creative and unique ways? Here’s how you can use reverse graffiti to help your brand stand out.

What Is Reverse Graffiti?

Reverse graffiti is a form of street art that consists of removing dirt and grime from surfaces to create images and patterns. The artist uses a variety of tools to remove the build-up of dirt, including brushes, scrapers, and even power washers.

The result? An image that appears to have been “carved” into the surface.

Reverse graffiti is often seen as a more environmentally friendly alternative to traditional graffiti, as it doesn’t involve the use of spray paint or other chemicals. Additionally, it can be seen as a form of urban beautification, as it can turn dirty surfaces into works of art.

In terms of marketing, reverse graffiti has also become hailed as one unique way to engage in creative PR stunts and increase brand awareness.

While there are various ways to integrate reverse graffiti into a marketing campaign, businesses can use it to create temporary logos or messages on sidewalks or walls.

And, businesses have used it! Brands ranging from IKEA to Puma and even BMW have all used reverse graffiti as a way to infiltrate the local culture and promote a new product launch or campaign in a unique way.

As mentioned, reverse graffiti is a type of street art that involves etching or carving (not permanently) images or words into surfaces like walls or sidewalks.

Because reverse graffiti does not involve any permanent damage to the surface, it is often considered to be a form of clean advertising. In fact, when you get rid of the dirt around the stencil you’re quite literally cleaning something.

Some cities have even begun using reverse graffiti as a way to clean up dirty surfaces. By encouraging people to etch their designs into walls and sidewalks, cities can save money on costly cleaning and repair bills.

In an age where consumers are increasingly more likely to do business with eco-friendly brands, this type of clean advertising can help you achieve your brand goals while catering to their needs and interests as well.

Don’t think it’s that big of a deal? 4 out of 5 people polled as part of a study said they were likely to choose a brand with a positive approach to environmental sustainability.

The History of Reverse Graffiti

While this type of street art has been around for quite a while, it wasn’t really made popular as a form of marketing until the early 2000s. It’s believed that Brazilian artist Alexandre Orion was the first artist to popularize reverse graffiti in a mainstream way.

Orion is often credited as the first street artist to put up a large-scale “clean” tag. He did so when he etched skulls into the soot-covered walls in the tunnels of São Paulo.

His motive? Conveying to the public that the tunnels would soon be a catacomb if we didn’t start taking pollution seriously.

The “clean” tag was called Ossario and was over 1,000 feet long. However, it didn’t last that long on the walls of the tunnel as the city of São Paulo wasn’t too pleased with the stunt. Remember, this was over 15 years ago and reverse graffiti was still new.

The street artist that goes by the name of Moose is actually a UK-based artist named Paul Curtis. He is well-known in the industry as being the first artist to make mainstream reverse graffiti a “thing” in the UK.

His works led him to create Street Advertising Services, which was a precursor to other street advertising marketing agencies like ours! Moose has worked with diverse brands but started with Gumtree Classified Ads in 2006.

Regular graffiti is illegal in certain instances because it can damage public or private property. However, this isn’t the case with reverse graffiti. Instead, you’re, in essence, trying to help improve the quality of the property because you’re cleaning it.

That doesn’t mean it’s without issues, though. Because most artists use a power washer to clean away grime or dirt on surfaces, it’s important to be careful to ensure that the power washer doesn’t inadvertently cause any damage.

Furthermore, there are plenty of considerations that need to be had when participating in this activity such as:

Nevertheless, if you choose to partake in this form of marketing, the bottom line is that it’s legal. Whether or not it’s effective will depend on the quality of the marketing agency you’re working with, though!

Let’s dive a little more into the role of reverse graffiti as a marketing tactic. Namely, how does it fit into the world of guerrilla marketing?

Guerrilla marketing is a type of marketing that focuses on low-cost, creative tactics to promote a product or service. It often relies on word-of-mouth marketing to spread the word about a business, and it can be used in both online and offline settings.

Guerrilla marketing is often used by small businesses or startups that don’t have the budget for traditional advertising methods. However, as mentioned above, big brands such as IKEA, Domino’s, and even Puma have all used reverse graffiti as a marketing technique.

The key to getting it right? While it can be an effective way to get noticed, it’s important to use guerrilla marketing tactics sparingly and strategically, as overuse can annoy potential customers and damage your brand’s reputation.

When it comes down to it, reverse graffiti can be an effective guerrilla marketing tool because it is eye-catching and attention-grabbing. Likewise, it can also generate positive publicity for a business if it is done in a creative or humorous way.

As mentioned at the beginning, there is a lot of value in guerrilla marketing. The effects it can have on various types of marketing campaigns can be huge for the low initial investment that most of these campaigns require.

In a 2018 article from Small Business UK, authors noted that a 2015 Jimmy’s Iced Coffee campaign helped increase sales by 40%.

Not only that, but the brand was able to produce a fun song that went so viral it was released on prime-time TV news. The cost of creating that rap? A fraction of what it would have cost if they had created a TV advert and had to pay for that airspace.

After it aired on the news, their follow-up campaign was a rap that garnered over 1 million views on YouTube. Their social media following grew by 50% on Facebook and by a whopping 400% on YouTube.

See, guerrilla marketing and especially reverse graffiti have numerous benefits! Let’s walk you through the main ones.

Let’s start off by clarifying that reverse graffiti isn’t “free” or necessarily “cheap.” When we say that it’s cost-effective, we’re talking about the potential impact that it can have in relation to what you’d have to pay to get that same impact from another form of marketing.

When you invest in Google Ads, for example, you are paying to reach a wider audience. The more you pay, the more clicks you get. However, with reverse graffiti, if you’re able to strategically place your artwork, you don’t have to pay for each person who sees it.

Instead, you’re able to place it where there’s the most foot traffic and then reap the benefits of paying a one-time fee.

However, reverse graffiti is more cost-effective than other forms of street advertising (in some cases). This is because it’s less labour-intensive than traditional graffiti removal methods. As a result, it can save time and money for business owners.

Do keep in mind that you’ll still need to pay a creative team to strategise and carry out the entire campaign creation process. This includes coming up with a super unique idea, developing the design of the artwork, and creating reverse graffiti.

It’s hard to make a connection with consumers in today’s busy world. Everybody is running a thousand miles a minute with a laundry list of things they need to do. We’re more separated than ever and it’s made it difficult for brands to authentically connect with their target audience.

With reverse graffiti, this is a whole lot easier. Building a connection with people is a lot easier through art. Reverse graffiti provides a clean, environmentally-friendly way for brands to create art, help clean a local community, and connect with consumers while doing so.

Reverse graffiti is also often seen as more emotionally impactful than traditional forms of street art because of its unique methods and message.

By using the negative space to create something positive, reverse graffiti artists are able to send a message of hope and positivity in the midst of a dirty and grimy cityscape. In a world that is often filled with negativity, reverse graffiti provides a much-needed breath of fresh air.

This is especially true if your brand is eco-friendly or somewhat political in nature. If you’re a controversial brand, to begin with, reverse graffiti can help take things to a whole different level in the best way possible.

We’ll get into viral reverse graffiti campaigns below with examples from brands such as IKEA and Stranger Things, but just know that the ability to go viral is a massive benefit of investing in this type of marketing.

How can your reverse graffiti campaign go viral?

As a result, your reverse graffiti content is more likely to be shared, liked, and commented on than other types of content.

Furthermore, increased social media activity will not only lead to more followers but also to higher search engine rankings. So, if you are looking to increase your social media presence and go viral, consider creating some reverse graffiti content.

Additionally, reverse graffiti can help you go viral by generating word-of-mouth marketing. When people see your reverse graffiti creations, they are likely to talk about it with their friends and family members.